Get me outta here!

YOMOGI Episode 1 K1 friends collected yomogi leaves at the back of Kindergarten.
We used the leaves to dye white cloth. (please see blog posted on October 8, 2019)
On that same day, some students suggested to make Yomogi Dango.

YOMOGI Episode 2 K1 friends were really excited to make Yomogi Dango.
So, they picked yomogi leaves again. The day before cooking, they guessed what are the effects of Yomogi to our body. Many students shared their ideas but after some research, we found out that yomogi leaf is good for eyes, stomach, skin and other body parts. With this, they were more motivated to make yomogi dango and eat so they will be healthier.

They washed and boiled the leaves, then tossed in the blender.

They mixed rice flour with yomogi paste, knead them up, then boiled them.

They ate yomogi dango with kinako (soybean powder). Most friends really enjoyed it!!

K1 friends made pizza dough on Tuesday and they made pizza on Wednesday. K1 friends are now interested in plants so some of them asked K2 friends to take some basil for topping.

We walked around to look for plants that have smells. The children tried to smell some plants before exploring.

We are going to invite grandparents on Friday, September 13th for National Holiday “Respect for the Aged” (September 16th). We will have a special event with them. The tentative plan is as follows. The children are looking forward to seeing them so please come and have fun!

日頃の幼稚園へのご協力ありがとうございます。今年度も終わりに近づき、 幼稚園に対するアンケートを行いたいと思います。ご協力よろしくお願いします。 Thank you for your support this year. We would like to ask few minutes from you to please answer our March 2019 Kinder Survey. 🙂

It was such a beautiful day, G9 students invited kindergarten friends to eat lunch and play together.

Thank you, G9 friends for inviting us to eat and play together!

We had so much fun! 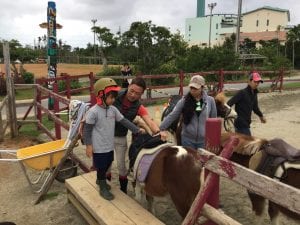 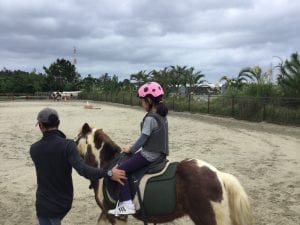 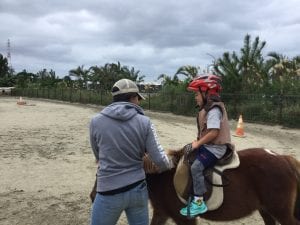 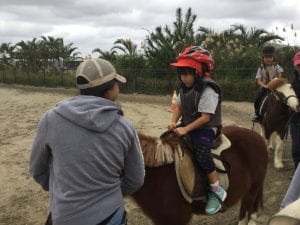 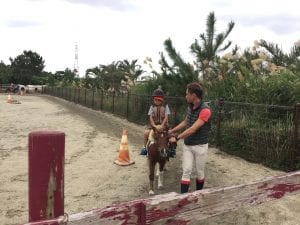 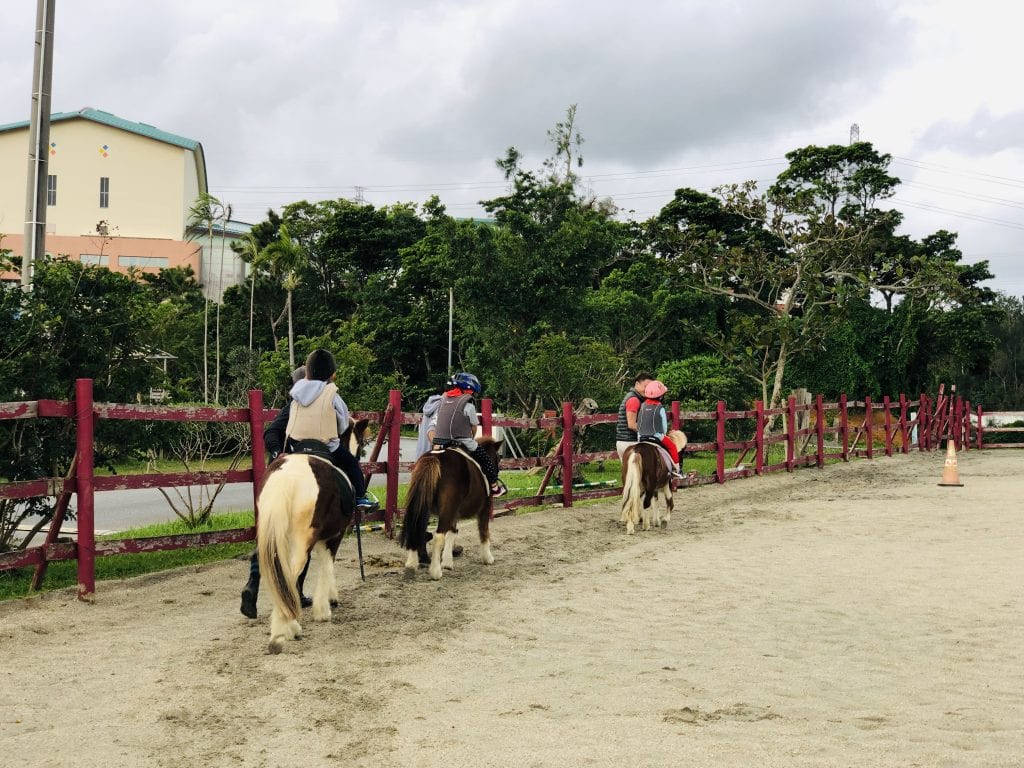 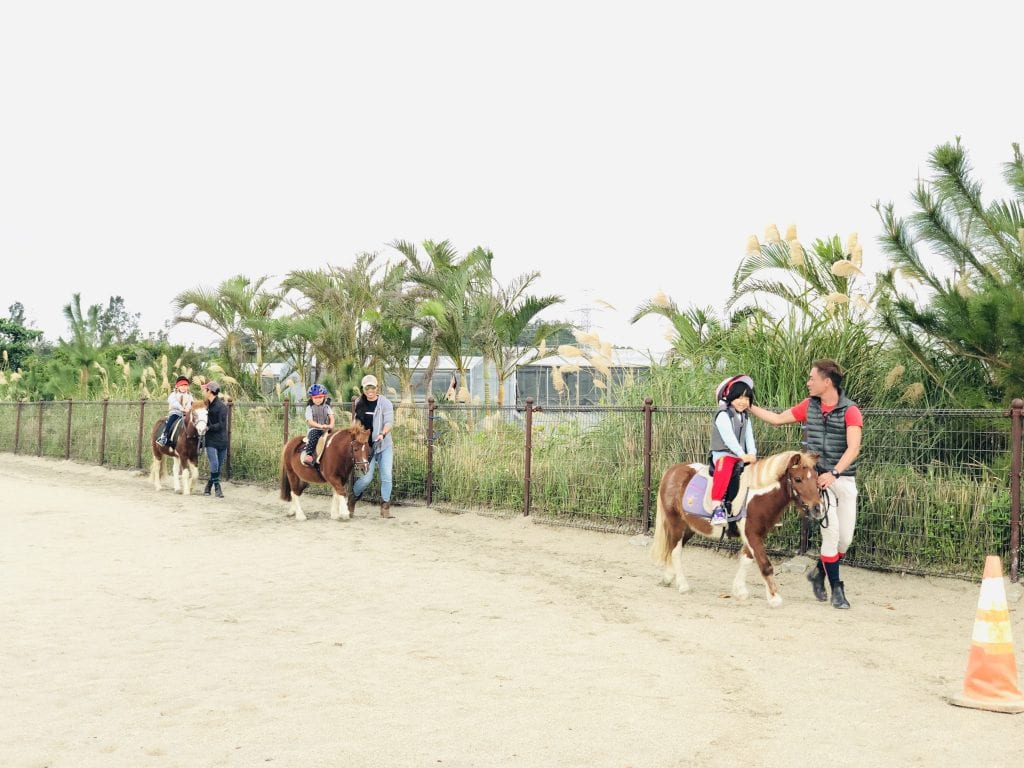 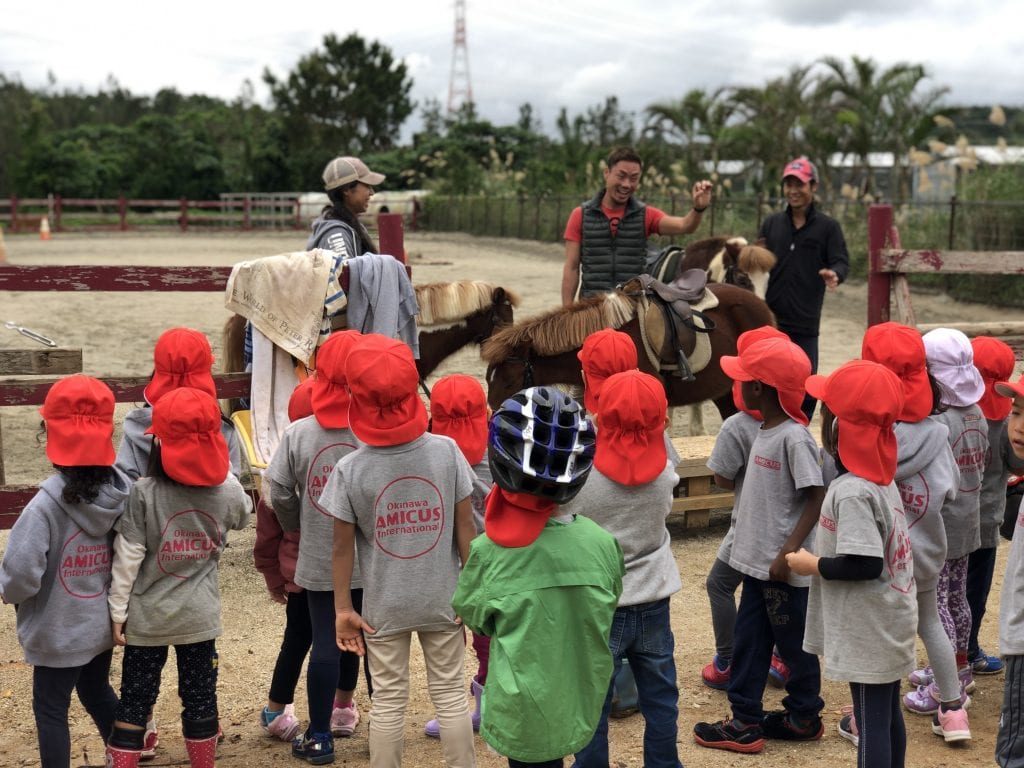 Please wear usual gray shirt and blue pants going to school. If your child has rain boots, let them wear it to school tomorrow. Also, please bring your  helmet if you want your child to use his/her own.

We hope that you are having a good weekend 🙂

Here is another link that you may try:

Thank you and enjoy the rest of this long weekend. 🙂

First, we discussed the outline of the flag. This was the idea students had in creating our flag. 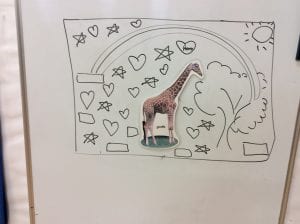 Then we had students choose if they wanted to make the rainbow, tree, or the giraffe of the flag.

Thus, the class was divided into three groups (rainbow, tree, and giraffe) to create the flag.

All the groups went outside to sketch their idea.

The group discussed what materials they wanted to use to create the rainbow. Felt was decided and they started to cut the felt to glue it on the flag. 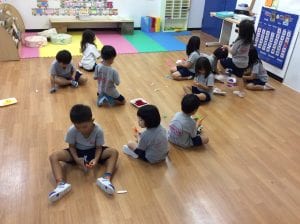 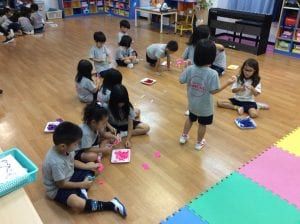 While sketching their idea on how to draw the tree, a leaf fell on a student`s sketch. Then, another student had an idea to use actual leaves and trees instead of drawings. 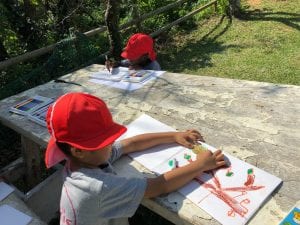 They collected the materials from outside and used paint, spray, tree branches, and leaves to glue onto the flag. 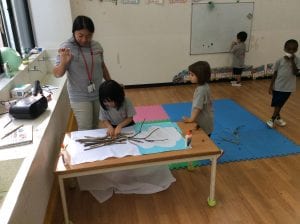 After everyone sketched their giraffe, everyone gathered to combine each giraffe sketch to make their original giraffe!

A student suggested instead of the collection of random drawings, have each student responsible for different parts of the giraffe such as head, face, body, neck, and legs. As a result, everyone contributed to drawing their favorite parts of the giraffe. 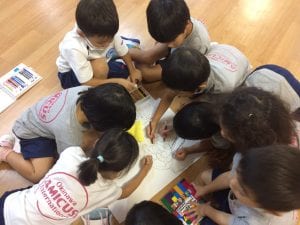 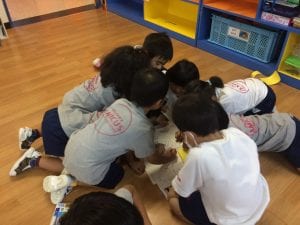 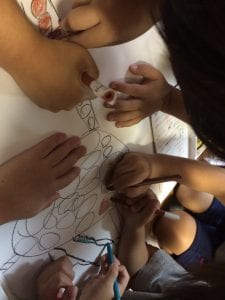 After they finished, they chose their favorite color and stamped their group (star and heart).

K1 students said we should add teachers too! 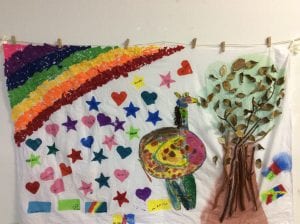 We hope you love our flag!! Good job K1!